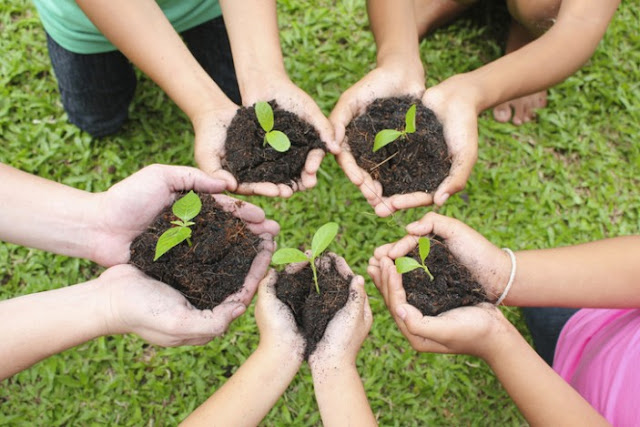 ‘I believe that very soon our town shall be called ‘Green Nagar’ and there will be thousands of trees marking the lanes and filling the empty spaces.’ I told my friend while we were taking a walk in our locality on an October evening.

‘I contribute to XYZ charitable trust every month’. Replied my millionaire friend in a calm voice. ‘For what?’ I asked him keenly. ‘They plant trees in our town’, was his reply in the same soft voice.
‘But I can hardly find one’. I said. ‘Oh! they have negotiated a wholesale price with a farmer if they buy 10000 saplings and they are expected to meet their fund generation target by the next year and the manager of the trust assured me on this’. Came his instant reply.

With increasing curiosity in the subject, I put another question before him. ‘But there are many trusts doing similar work, why did you choose this one?’ And another instant reply in not so calm but thrilling voice came. ‘It also allows me tax exemption if I contribute to this trust because they meet the government’s criteria for tax-exempt donations. You see they have a donor base of thousands of people.’

Without looking at my gesture he put a counter question after explaining all about his tax-exemption. ‘Don’t you think it saves your tax this way and you also get to help the society at the same time?’ ‘No, I prefer to volunteer for my NGO where I plant a tree every month in my locality at a gap of 10 feet. I believe by next year my locality would have no space for another tree and we shall have birds as our new neighbours seeking shade and shelter.’ I smiled while putting forth my reply.

‘But that’s a very small amount of contribution and it doesn’t cover the whole town but only your small locality. That does not make even five percent of the whole town.’ By now he was doubting if I really had a belief in a large tree plantation drive. ‘Well! If every person of every locality starts planting a tree I believe we will turn our whole lanes into a green belt even before that trust actually collects its donations.’ I explained trying to project my idea upon his skull.

‘Your idea sounds good but don’t you think the primary duty was of government or is it possible for a common man to turn this belief into a reality?’ Came a serious question from his side.

‘I think and believe the same that the primary duty is that of government. But I also believe in the actual facts that governments are good at building bridges, roads and dams. When it comes to micro moral responsibilities they fail miserably and history is a living proof of that.’ And then I went on explaining the concept of a self-contained NGO. ‘Moreover, it is a moral duty of ours to keep our surroundings green. We always cut a tree for our furniture but want our government to plant another. Due to our lazy attitude, we consider the government as a waiter in a restaurant who clears the plates after we dine. But what about the digestion process? Who clears that process? It is us who have to do that and digestion is similar to the response we get after we cut down the trees in the form of global warming and mass destruction of natural resources. That is where our digestion becomes indigestion.’
By now the sun had set and I could see a big smile on the face of my friend while moonlight reflected over his face.
We hope the idea behind writing this first post of ‘I Am NGO’ touches your heart, conscious and sub-conscious mind.
‘Plant a seed so your heart can grow,
Water it so the goodness can flow’